The key is continuous communication about the goal, sharing the same organizational goal, and giving specific feedback.

What are the managers doing to drive direct reports' actions for achieving their goals?

We have introduced in "Goal Achievement and Performance Reviews" on how "spending more time with direct reports to talk about the organizational goals" and "keeping track of their progress and providing feedback" is essential in getting the direct reports to be more determined about achieving their goals.

What other interactions are useful in accelerating the direct reports' actions towards achieving goals?

As Coaching Research Institute concluded that "Giving feedback" is the most important action for the managers to take, we would like to look deeply into this by reflecting back on the three survey questions listed below.

・Feedback as a catalyst
Does feedback from the manager become a catalyst to taking new action?
(4 point scale: 4. Works as a catalyst; 1. Does not work)

・Reasons for selecting the answers for questions above. (Free answer)
As a result of the survey, "feedback as a catalyst" and "specific feedback" had a strong correlation （r=.70）.

Also, discussion on goal setting or talking about the ideal situation has shown to be an important interaction for managers to motivate their direct reports.

As a conclusion, to accelerate direct reports' action towards achieving their goals, the continuation of communication on the topic, and sharing the direction the organization is heading to and its goal is crucial. Also, feedback as specific as possible works best.

This might be a good chance to look into how you can work on accelerating direct reports' actions towards achieving goals. 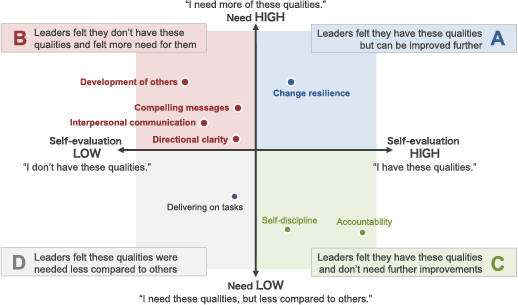 What sort of leadership do direct reports expect of their direct managers? To answer this question, we studied the data of 21,843 direct reports gathered from our Leadership Assessment.